PRESIDENT of the Nigerian-American Chamber of Commerce (NACC) and a Trustee of LNID, Chief Olabintan Famutimi, on Tuesday described the outgoing British High Commissioner, Dr. Andrew Pocock, as nice and always ready to assist people. Speaking during his send-off dinner for Pocock in Lagos, the past president of the Nigerian –British Association described Pocock as a very warm, friendly and engaging person, “a man who is always there for people at anytime.” 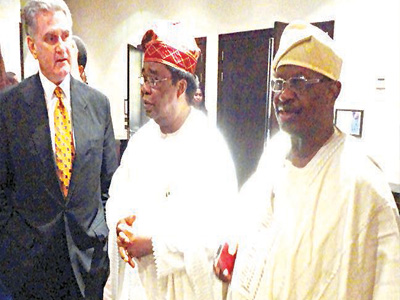 Jokingly, he said he did not ask for visas from the High Commissioner, therefore, “you should never ask a diplomat for visas. He has been so good.”

He noted that trade relations between Nigeria and Britain have doubled in the last three years. “I am hosting this event for a friend I cherish. He wrote nice things about me in my book,” he said. According to him, since Nigeria gained independence, Britain has been very liberal to the country: “In the history of Nigeria, Britain has been the most liberal and helpful to us.

Nigerians have risen to be chairman, managing director in their companies, like Shell.” The Group Managing Director/Chief Executive Officer, Tricontinental Group, Prof. Toyin Ashiru, also described Pocock as a distinguished diplomat who loves Nigeria, stating, “he has done a great deal to increase bilateral relationship between Nigeria and the UK.”

Giving the toast, the Acting Consul General of the United States Embassy, William Laidlaw, said that Pocock has left a big impression on Nigeria.

On his part, Pocock described his experiences in Nigeria “as remarkable.” Dignitaries at the occasion included the former Minister of External Affairs, Prof. Bolaji Akinyemi, Director General of the Nigerian Institute of International Affairs, Prof. Bola Akinterinwa, Australian Honorary Consul, Alan Davies, and Chief Operating Officer of The Guardian, Dr. Alex Thomopulos, among others.